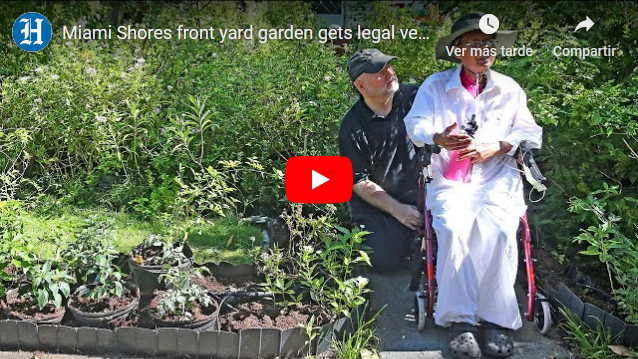 In a win for gardeners everywhere, a Florida couple who battled the state for six years is enjoying the right to replant a vegetable garden that had brought them joy for years.

Tom Carroll and Hermine Ricketts of Miami Shores held a ceremonial replanting on July 1, the day a statewide law went into effect that nullified local bans on such gardens.

In 2013, Carroll and Ricketts of Miami Shores, a small burg of 10,500 Floridians that was originally a neighborhood within the city of Miami until it was incorporated as its own village in 1932, were ordered by town officials to do away with the vegetable garden that had been thriving in front of their home for 17 years.

From the sounds of it, a majority of Carroll and Ricketts’ neighbors took no issue with the immaculately maintained front-yard fruit and veggie patch. Many likely envied it — and how could they not? Home to pomegranate and peach trees, strawberry and blueberry bushes and a wide array of leafy greens and colorful flowers, the garden was as beautiful as it was bountiful — a veritable front-yard salad bar. Sure, it stuck out amidst a suburban landscape dominated by polite, humdrum patches of manicured grass and aesthetically questionable statuary. But it was anything but unsightly — a good-looking, sustenance-providing sore thumb if there ever was one.

And as such, for years Miami Shores officials also took no issue with the couple’s edible landscape.

Then came a new village zoning ordinance that called for front-yard conformity and dictated what residents could plant on their property. Vegetable gardens weren’t outlawed outright but they were relegated to backyards. As reported by the Miami Herald, the crackdown was prompted by a complaint issued by a single neighbor. Whether or not said neighbor was new to the area or had simply been harboring ill-will toward Carroll and Ricketts and their garden for years is unclear. But the who didn’t matter to this couple. Their backyard was too shady to grow vegetables, so that wasn’t an option.