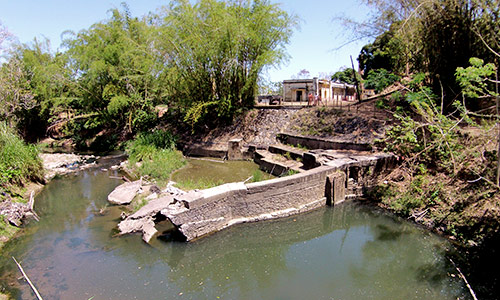 The Antiguo Acueducto del río Piedras (San Juan Waterworks) is the only known Spanish-period aqueduct in existence in all of the United States and its territories. A unique piece of our historic and natural heritage, the San Juan Waterworks are inextricably linked to both the landscape and ecology of the Piedras River, as well as to the development of the city of San Juan and its people.

Because of its unique history dating back to the middle of the 19th century, the Department of the Interior’s National Park Service has included the site in the National Register of Historic Places since 2007. In addition to its immense historic heritage, the San Juan Waterworks are nestled in the heart of the Rio Piedras Botanical Garden, giving it an unparalleled natural location in what is perhaps the most important green lung in the city.

Para la Naturaleza manages nine of the 23 acres spanning this historic site in the heart of San Juan’s metropolitan area. It’s composed of a small weir that supplied water from the Piedras River; a valve room; six sedimentation and filtration tanks; an engine room with its carbon deposit; and an employee house.

Inspired by the most modern aqueducts of his time, Engineer Juan Manuel Lomber proposed the original design in 1847. Since then, the project went through many changes in the hands of local, American and British engineers, until being completed around the time of the Spanish-American War, with some main components installed some years later, between 1917 and 1918.

The San Juan Waterworks are an unsurpassable component of our historic and natural heritage. On one hand, their supply of clean water was fundamental to the city’s growth along a main corridor that still is the Ponce de León Avenue. And on the other, their unique design weaves the historic site into nature, taking advantage of the last natural meander of the Piedras River.

But for all their historical assets and integral relationship to their natural context, the San Juan Waterworks are in danger of being lost forever.

Around the middle of the 1980s, the US Army Corps of Engineers began work on the channelization of the Puerto Nuevo and Piedras Rivers, recommending the straightening of their riverbeds and their confining into concrete channels as measures for flood-control. Although gradual implementation of these measures throughout the last 30 years have spared the San Juan Waterworks historic site, the channelization project has not been phased-out yet.

We have been working on the recuperation and restoration of the San Juan Waterworks since 2007 and in 2014, we partnered with the National Trust for Historic Preservation in order to draw another fate for this historic site and the Piedras River.

In the face of this imminent threat of destruction, the National Trust for Historic Preservation designated the San Juan Waterworks as a National Treasure in 2014, becoming our ally in proposing a different future for this incomparable historic site right in the center of San Juan.

We are determined to protect this irreplaceable river ecosystem and its unique historic site and in the process, we will rediscover the relationship between the people of San Juan and the most important water resource of their city. To accomplish this we will propose a conceptual plan for the historic site that combines research, recreational and educational programs into completely restored facilities.

In short, we want to bring back the Piedras River to the everyday life of the people of San Juan. The University of Puerto Rico has been involved in this process, along with the Puerto Rico Aqueduct and Sewer Authority and other community-based organizations. But now we need your help.

Visit the National Trust for Historic Preservation’s National Treasures website and find out how you too can be a part of this effort by donating money and signing our petition to the US Army Corps of Engineers to reevaluate their channelization project and to join us in creating a future for our historic and natural heritage.

Join our partnership to rescue our historic heritage and be a part of this effort! Visit: