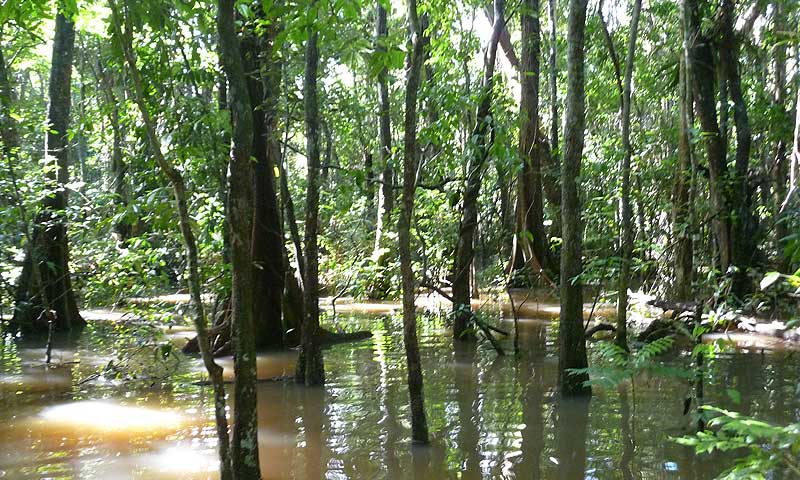 The Dorado Pterocarpus Forest Natural Protected Area (DPFNPA) is located in the northwestern limits of the municipality of Dorado, on the north coast of Puerto Rico. Covering a total of 30.09 acres, the most important ecosystem found in the area is the Pterocarpus freshwater swamp, a particular kind of forest within the subtropical moist forest life zone that derives its name from the dominant tree species that characterizes it, the Pterocarpus officinalis. The word “Pterocarpus” is Latinized Ancient Greek means “wing fruit,” and is due to the unusual shape of the species’ seedpods.

Together with other forest types and ecosystems associated to the Pterocarpus forest’s functional processes, the area as a whole is also known as the Dorado Coastal Moist Forest. Both the Dorado Pterocarpus Forest and the old secondary moist coastal forests that surround it are considered one of the most endangered forest ecosystems in Puerto Rico, and one of those most negatively affected by human activities. With high biological productivity, unique habitats, and stunning flowering plant species, the forest’s habitats are rarely found elsewhere.

During the 1980s, the Dorado Pterocarpus Forest was considered one of the best-developed and conserved Pterocarpus stands in all of Puerto Rico. Evidence of its maturity may be found in the rich diversity of epiphytes (air plants) that thrive throughout the area along with a number of bromeliads, orchids and rare species of shrubs. Small populations or unique individuals of several rare or endangered species have also been documented in the area, which also provides safe habitat for several species listed as critical elements.

Accessibility to the freshwater Pterocarpus swamp makes it an ideal location to demonstrate to the public the structure, composition, and complexity of his type of forest. It is close to important tourism attractions and amenities and can provide hands-on learning experiences for tourists and residents to these unique and endangered ecosystems.

The Conservation Trust of Puerto Rico protects and manages the DPFNPA since 1995, offering nature immersion experiences and other related activities in the area.