Flamencos sighting: a sign that our wetlands are recovering? 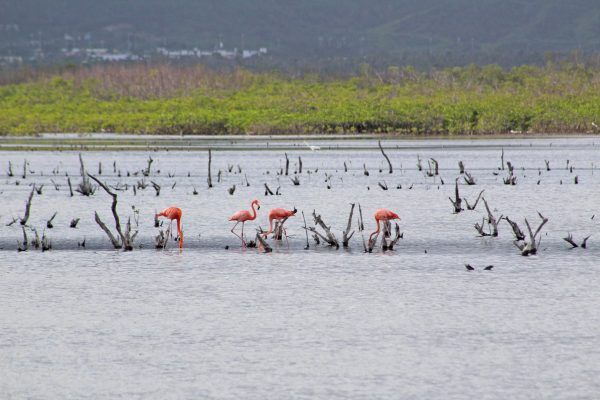 Since they were kids, Jean Carlos Díaz and Emmanuel Penzol have loved birds and nature. Currently, they study Wildlife Management at the University of Puerto Rico in Humacao. In August of 2017, they enrolled in the course “Population Ecology” and expected to learn how to enter biodiversity data into computer programs.

However, Hurricane María caused changes in the calendar and activities proposed to complete the course. At the university, there was no electricity and several infrastructures were impacted. For that reason, the professor asked his students to elaborate a field research proposal. That meant that they would not only be working on data entry, but they would be the ones to collect it. As Jean and Emmanuel had participated in bird monitoring events at Medio Mundo y Daguao, they knew that they could find individuals of White-cheeked Pintail, specie whose population has been greatly reduced in Puerto Rico.

They arrived at the wetland on 4 occasions looking for the White-cheeked Pintail. Before María, they had seen up to 40 individuals of that specie in that same wetland. During their post hurricane visits they did not find even one individual.

However, in the second census, “there were a lot of birds that took flight, made flocks and moved towards the same point,” said Jean Carlos. There was a lot of distance between the birds and himself, but he used his monocular -instrument that magnifies images allowing to observe distant objects- and followed their track.

“You must be confused, there are no flamingo

“Come closer and look,” Jean Carlos replied. When Emmanuel approached the monocular he confirmed Jean Carlos’ sighting. He saw the flamenco and when he moved the instrument they found two more. There were three and a week later a fourth individual appeared.

“To see them [the flamingos] was a matter of luck because they were far away and my partner [Jean Carlos] was observing other birds with the monocular,” said Emmanuel, who insists on taking a good picture of the flamingos as evidence. Jean Carlos and Emmanuel have continued to voluntarily monitor the birds of Medio Mundo y Daguao. “Whenever we come to the wetland we find the flamingos calm and eating,” said Emmanuel. Flamingos feed on herbs that give them their distinctive pink color. In addition, they are very sensitive to natural and human disturbances.

These young university students believe that flamigos have arrived in Ceiba due to urban development and the impact of natural phenomena that have recently been in many parts of the world. “Organisms have had to move in order to survive, and we are lucky enough, that in this wetland -because of its protection and remoteness- there are still resources left for them to sustain themselves and live,” said Emmanuel, who is from of Luquillo.

Why did the flamingos arrive to our islands?

He is agronomist but has been studying birds of Puerto Rico and the Caribbean for 17 years. In addition, he has developed management strategies for the conservation of their habitats and species. He identifies the flamencos’ visit to our wetland as evidence of ecosystems recuperating.

“The flamingos are aquatic birds closely related to wetlands. Also, they are very sensitive to disturbances,” said Alcides Morales, who works for Para la Naturaleza.

Alcides points out that the species that visits us is known as the American or Caribbean flamenco and is distributed within the Americas from Florida, the Yucatan Peninsula, part of Venezuela, some of the Greater and Lesser Antilles. The presence of these flamingos in Puerto Rico has been documented in the past.

There is historical data revealing that in 1940 a hunter found 7 individuals in a wetland in Vieques. Also, in the 2000’s, there were several sightings in the western and northern areas of the island. However, this migratory bird has been classified as a wandering specie because it visits our islands sporadically.

According to the scientist, the increase in sea levels – attributed to climate change and global warming- has caused loss of habitat for many species to feed themselves and nest. Likewise, species are being threatened -mainly- by urban development and hunting.

“We hope they form colonies within our islands now that there are wetlands that have recuperated naturally from agricultural exploitation and unplanned development that took place in the 1930s”, declared Alcides.