How much plastic do you consume every day?

These mussels each contain two plastic fibers, but that's before they sit on your plate. The air that we breathe and certainly the food that we eat are all sources of microplastic — and it adds up. 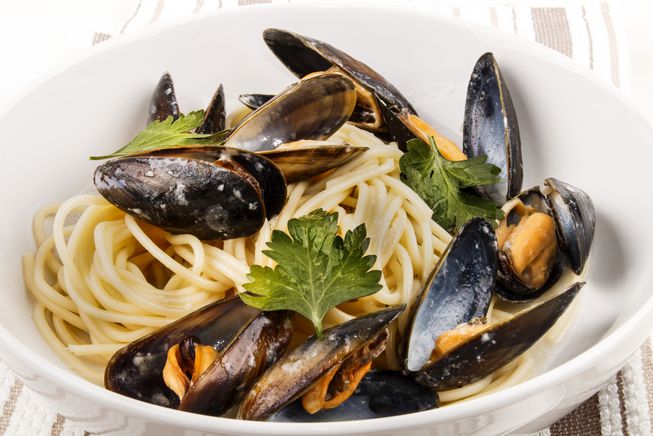 Microplastics aren’t on the USDA’s food pyramid, but maybe they should be. We’re certainly consuming enough of them to merit a mention.

Research led by Kieran Cox at the University of Victoria in Canada found that, on average, we’re consuming 50,000 particles of microplastic a year and breathing in a similar amount. She and her colleagues looked at the number of particles found in common foods and then looked at the recommended daily intake of those foods. They also looked at inhalation rates and drinking water sources, with bottled water winning the prize for best possible way to add more plastic to your diet. According to their work, those who get the majority of their water through bottled water consume as much as 90,000 more microplastic particles annually than those who drink tap water.

Their work, called Human Consumption of Microplastics, was an analysis of 26 studies that was published in the journal Environmental Science & Technology. And though the researchers know that such an analysis leaves room for a lot of variation, they think their numbers are “likely underestimates.”

The sources of this plastic are plentiful. Take dust, for example. Most of us have probably heard that much of the dust in our homes is made up of the dead skin we shed, but that’s actually a myth. Dust is made up of dander, insect waste, dirt — and a surprising number of chemicals and fungi.

We can add a new ingredient to the dust recipe, and that’s microplastics, small fibers that have broken down from larger plastic objects. While we’ve been worrying about how much plastic marine life ingests because of pollution, we haven’t been paying attention to how much plastic we ingest ourselves.

According to a June 2018 study, each time we sit down to eat a meal, more than 100 pieces of microplastic fall onto our plates with the rest of the dust from the air. IFL Science says the study, originally published in Environmental Pollution, was intended to compare the number of plastic fibers found in a mussel to the number eaten in the average household.