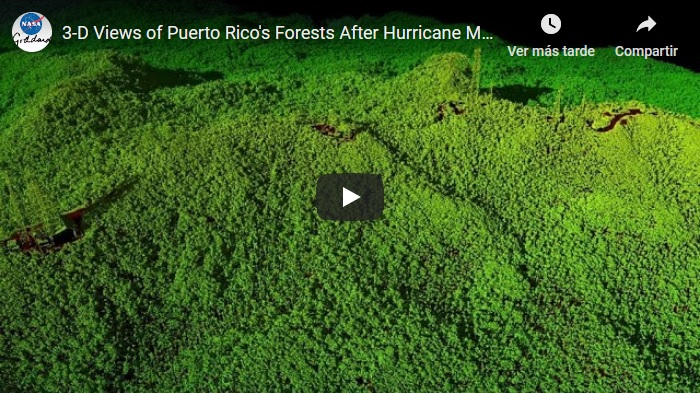 Hurricane Maria inflicted “unprecedented” and “fundamental” changes to Puerto Rico’s ecosystem, according to new studies conducted by NASA scientists and other experts. It’s part of the latest evidence that the 2017 hurricane was one of the worst natural and humanitarian catastrophes in modern American history.

Using extremely high-resolution mapping equipment, NASA measured every tree in Puerto Rico before and after Hurricane Maria, and found that the hurricane knocked over so many big ones, it reduced the average height of the island’s forests by about one-third. The storm caused 60 years worth of natural tree-falls in just a day. That will have profound effects on everything from water quality (destabilized soils are more likely to produce murky runoff) to the long-term health of the island’s tropical ecosystems.

The researchers unveiled the findings in a series of presentations at this week’s annual meeting of the American Geophysical Union in Washington, D.C., about 15 months after the storm struck, killing 2,975 people and kicking off one of the largest power blackouts in world history.

While many of the island’s tourist areas are back in business, its cities and people are still struggling to recover. On Monday, Gov. Ricardo Rossello signed a $2 billion tax break, a drop in the bucket compared to the estimated $43 to $159 billion in damages from the storm.

Although the frenetic news cycle has long since moved on from what’s happening in Puerto Rico, it’s still one of the most important places to understand our shared climate future — the tradeoffs that are currently taking place will define how people there survive the coming decades of escalating climate impacts.