Hurricane Maria killed 30 pct. of trees in some parts of Puerto Rico

The trees of Puerto Rico are resilient and many are resprouting after losing leaves and branches. So, mortality cannot be estimated from the way a tree looks. 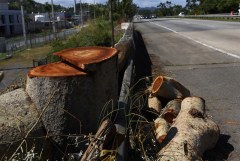 San Juan, Feb 5 (efe-epa).- Hurricane Maria killed 30 percent of the trees in some parts of Puerto Rico, according to the preliminary results of a study being conducted by the National Forest Service’s International Institute of Tropical Forestry.

The institute’s director, Ariel Lugo, told EFE in an e-mail that “Although there are places with high mortalities, such as 30 percent, there are also places with no mortality. To determine the most exact figure, an inventory must be made.”

The institute is currently conducting sampling in various spots around Puerto Rico with an eye toward getting a more exact assessment of tree damage on the island.

According to Lugo, the systematic sampling being carried out is based on both aerial and field photos and “constitutes the only way to say with a degree of certainty how many trees died in Puerto Rico as a result of Hurricane Maria.”

“The trees of Puerto Rico are resilient and many are resprouting after losing leaves and branches. So, mortality cannot be estimated from the way a tree looks,” Lugo emphasized.

Nevertheless, despite the fact that there is not yet an approximate or official figure for how many trees were partially or completely destroyed by the storm, many did fall on roadways, power lines, homes, vehicles, ripped up sidewalks or streets or were pulled out by the roots in landslides.

One area where a large number of trees were toppled was the El Yunque tropical forest, which extends into eight municipalities in northeastern Puerto Rico and which has not been reopened to the public since the storm.

“In El Yunque, we’ve studied … trees that lost more than half their height and that didn’t die, but resprouted so they can live for decades,” Lugo said.

“Our inventories seek to avoid confusing the visible effect of the (storm’s) wind with the real mortality of the tree. Unfortunately, the inventory is (still) under way and it’s going to take some time to present the final result,” he said.

Meanwhile, the director of the local Para la Naturaleza organization, Fernando Lloveras, told EFE that his group will also undertake a series of scientific analyses looking into the effect of Hurricane Maria on the island’s tree canopy.