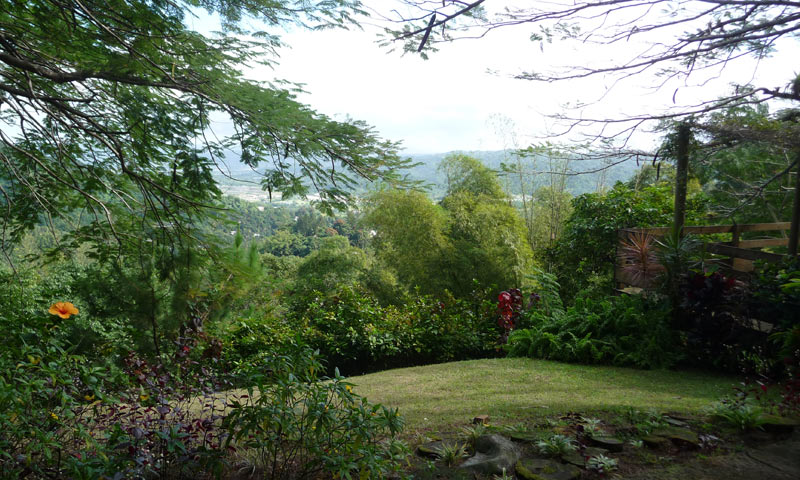 Las Lunas Natural Protected Area (LLNPA) lies within the subtropical wet forest life zone of the Sierra de Cayey, a ridge in Puerto Rico’s Metro-Central Region. It protects a total of 18.7 acres in the municipality of Caguas, in the eastern part of the central mountainous region.

Overlooking the Turabo Valley and the Luquillo Mountains, the property is mostly covered by a secondary forest that extends downslope into the Las Quebradillas Creek, towards the northern boundary of the property. The creek is a tributary of the Río Turabo, which in turn is also a tributary of the Río Grande de Loíza, one of the most important rivers in Puerto Rico and a key source of drinking water for the San Juan Metropolitan Area.

The LLNPA is mainly composed of secondary forest dominated by the native White Cedar (Tabebuia heterophylla), which is considered to be in an advanced successional stage with medium levels of maturity, due to the size of present individuals and the large amount of small trees at the forest’s understory. Other plant associations are also found in there, including gardens, shrublands, and pasturelands. A total of 51,529 trees were estimated to exist in the arboreal communities of the area in 2005.

A significant amount of animal and plant species can be found in LLNPA, along with an outstanding number of endemic birds amounting to more than two thirds of all 17 endemic species found in Puerto Rico.

On December 28, 2009, the Conservation Trust of Puerto Rico purchased the lands of the Las Lunas Natural Protected Area from Toni Hambleton, a celebrated ceramic artist and native of Mexico who moved from Chicago to Puerto Rico with her husband, Robert Hambleton in 1962.