Ever since Hurricane Maria devastated the island last fall, Jonathan Marvel and his team at Resilient Power Puerto Rico have been sparking a renewables revolution, one community at a time. 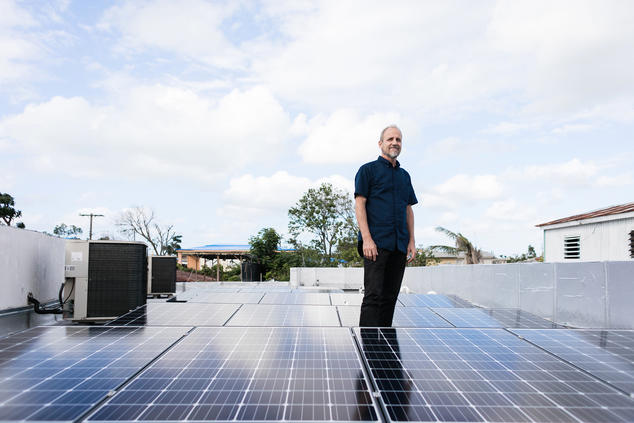 The inventor and futurist Buckminster Fuller was perhaps best known for the idea of Spaceship Earth, which sees our planet as a set of interconnected systems. His grandnephew, the architect and urban designer Jonathan Marvel, has a similar vision, albeit on a smaller scale: to harness the power of the sun to heal hurricane-ravaged communities of Puerto Rico, his birthplace.

From New York, Marvel followed the rash of storms that blew through the Caribbean in September 2017. Shocked by the devastation left in Hurricane Maria’s wake—including the destruction of Puerto Rico’s electrical infrastructure, which cut off power for an estimated 3.4 million people—he vowed to help. Using his experience working with energy efficiency and environmentally friendly design at his New York– and San Juan–based firm, Marvel Architects, he developed a plan to bring solar energy to the people of Puerto Rico and set about securing funding. His vision was partly inspired by solar-powered childhood summers on an off-the-grid island in Maine’s Penobscot Bay (Marvel’s architect father also had an interest in renewables), and his plan was modeled on a successful recovery effort in the aftermath of Superstorm Sandy by a group called Power Rockaways Resilience.

That fall, with Cristina Roig-Morris, a Puerto Rican also living in New York City, Marvel launched Resilient Power Puerto Rico. The group—Marvel, Roig-Morris, and a small team of advisers and partners with headquarters in San Juan—decided to focus on repowering residential buildings, community centers, and the microgrid (local, freestanding power grids that operate autonomously from the central electrical system). Initial efforts have focused on the community buildings because, Marvel says, “we can impact the lives of a lot of people with a small investment.”

In Maria’s aftermath, community centers became the source of basic necessities like food, water, power, and information. And in many high-density areas, Marvel notes, up to 5,000 people can live within a short walk of these hubs. So far, supported largely by investments from foundations in Puerto Rico and diaspora communities in New York and Silicon Valley, his team has installed enough solar panels to power seven community centers. The goal is to equip more than 200 centers across all of Puerto Rico’s 78 municipalities.