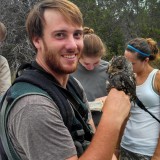 Normally, in these book reviews, I do my best to present a fair, unbiased account of what a book does well, as well as what it doesn’t do so well. However, in this case, I want only to tell you how INCREDIBLE this book is. A collection of stories, poems, drawings, and photographs contributed by numerous Chicago artists, scientists, and residents, it whisks the reader through the streets, parks, and history of the Chicago region, giving a perspective on the city’s relationship with nature that is at once complete, nuanced, detailed, entertaining, and surprisingly intimate.

The first contribution, “Keeping Chickens,” by Terra Brockman, provides a glimpse into a schoolyard chicken-keeping program. Many people may not consider chickens to be wildlife, or a schoolyard to be wilderness, but the book isn’t really about either of those things. “City Creatures” is really about relationships. In an urban setting like Chicago, the most influential participants in any relationship are almost undoubtedly people, and the real surprise and delight of “City Creatures” is just how human it is.

Urban development has had profound impacts on nature in Chicago, but the interesting story is of the opposite interaction: how nature has influenced the people.

There are a few contributions that focus mainly on plants and animals, such as Stan Gehrt’s portrait of Chicago’s coyotes, which he has dedicated his life to studying. But most of the stories in “City Creatures” focus on how humans and nature have interacted, and are still interacting, to make Chicago what it is today. Someone with a more detailed knowledge of, and experience with, Chicago could speak better to this, but the book gives a fascinating historical perspective on how the landscape of the Chicago region has been altered by human activities. The Chicago region was, and still is, one of the most biodiverse areas in North America, owing to its proximity to both Lake Michigan and to tallgrass prairie habitat, as well as its role as a migration stopover point for innumerable migratory birds. Urban development has had profound impacts on all of these, but the really interesting story is of the opposite interaction: how nature has influenced the people of the Chicago area.

Chicago’s history as an area rich in biodiversity has inspired a sentiment of stewardship into the area’s culture. “City Creatures” provides numerous examples of this ethic in practice throughout Chicago’s urban wilderness. From the restoration of Bubbly Creek (“Canoeing through History: Wild Encounters on Bubbly Creek,” by Michael Bryson) to the creation of a natural classroom outside the American Indian Center (“Kiskinwahamâtowin [Learning Together]: Outdoor Classrooms and Prairie Restoration at the American Indian Center of Chicago,” by Eli Suzokovich) to people volunteering their early mornings to find unfortunate migratory birds that have fallen to the streets after striking one of Chicago’s many skyscrapers (“Migration: A Bird’s and Birder’s Eye View” by Joel Greenberg), inspiring stories of people caring for nature abound. A particularly hopeful note comes from the story of the Prairie White-fringed Orchid, a severely endangered plant found in one of Chicago’s parks by a young Latino college graduate. The population sometimes was as low as four individuals, and in some years no orchids were found. However, through the dedicated efforts of scientists and volunteers, the orchid has made a comeback and the population now numbers in the hundreds or thousands.