Nonprofits Come Together to Reforest Coasts and Rehabilitate Sand Dunes 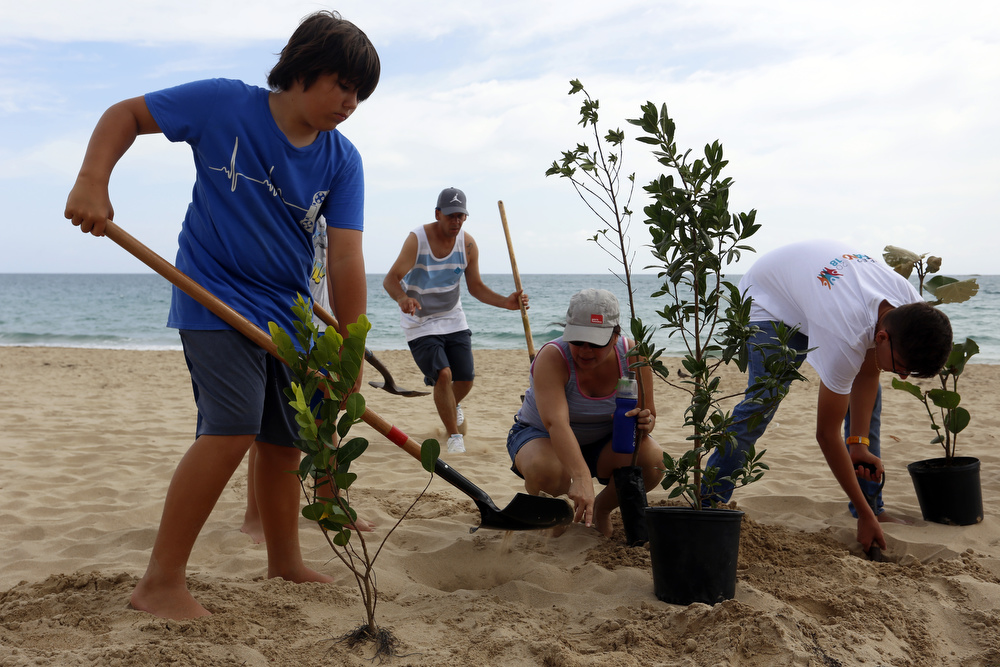 The shoreline is constantly exposed to significant impacts such as storm surges, winds, continuous sun exposure, flooding and constructions erected by humans. As a response to the impacts by hurricanes Irma and Maria, nonprofit organization Coalición de Restauración de Ecosistemas Santurcinos (Coalition for the Restoration of Eco-Systems in Santurce; CRES, for its Spanish acronym) has begun to restore dunes in beaches of the metropolitan area, thanks to the planting of native trees.

According to Yvette M. Núñez, president of CRES, the main purpose of this project was to mitigate the damage caused by Hurricane Maria and strengthen the ecosystem services of the beaches. By creating a natural barrier with a great potential to protect the coast due to the absorption and reduction of the impact of the energy of the ocean and the wind, it protects the shoreline wildlife and increases safety for humans along these areas.

To this date, citizen volunteers have planted 463 native and endemic trees in eight events that have included the beaches of Ocean Park, Parque del Indio, Último Trolley, Condado and the Carolina Public Beach.  Some of the species planted in these beaches were sea grapes, cocoplum, pigeon plum, greenheart, spiny fiddlewood, yerba de cordón, frangipani, common purslane and Jamaican nettletree.

Paco López Mújica, president of the community-based organization Arrecifes Pro Ciudad, Isla Verde Reef Marine Reserve — the first urban marine reserve in Puerto Rico — explained that, in the context of the reserve in Carolina, “the reefs and the dunes are our natural allies to avoid erosion. The only two natural barriers that help us diminish coastal erosion are the coral reefs that are under water reducing the energy of the waves, and the sand dunes in the beach that keeps amassing. The sand is the beaches’ money and the dunes are their bank. The sea moves the sand to the shore and the wind accumulates it beyond it. With the aid of the vegetation, the sand starts to create mounds.”

For his part, Fernando Lloveras San Miguel, Esq., President of Para la Naturaleza — the organization that donated the great majority of the trees that were planted in the coastlines— commented that: “we must stress on the importance on coastal planting and dune rescue, especially because we have lost a great part of the coastline after the impact by hurricanes Irma and Maria, which were followed by the strong surges that caused serious damages to our coasts. The purpose of planting endemic and native species is particularly important, since these species are the ones that are adapted to our climate and resist the impact of strong winds and surges,” he concluded.

When thinking about reforestation, the most common references that come to mind are events in forest areas, drainage basins or urban settings. However, planting in coastal areas is fundamental to avoid the erosion in beaches, as well as to serve as a defense against flooding and storm surges and increase the security of the people that live in these settings. It is also vital in the restoration of the ecosystems that foster wildlife that need the dunes to survive. According to the Puerto Rico Census, the population living in the coastlines for the year 2010 was of 2,317,189 inhabitants — 56% of the island’s population.

Furthermore, and according to data provided by the Puerto Rico Department of Natural and Environmental Resources (DRNA, for its Spanish acronym), there are two types of sand dunes: active and stable. Active sand dunes consist in lose calcareous sands that form dunes throughout the northern coast of the Island.

In this case, the sand is loose, and it is clearly noticeable that the dune is gaining or losing sand; its size, shape and position suffers alterations.

How are sand dunes formed?

To understand sand dunes, we must first understand the sand. In general terms, sand is formed by the erosion of rocks and animal sedimentation.

The currents transport the sand to the coast. The waves and the tides deposit part of this sand in the beach. The wind moves the dry sand to the high beach. The tides also contribute to the transportation of the sand. Certain species of plants and animals that are adapted to the existing conditions of the dunes start to colonize them.

Vegetation is the most important factor that controls coastline dunes, which is why it is important to plant in coastal areas. Once the sand dunes reach a stable form, they start to be covered by permanent vegetation, which minimizes the movement of the sand. Finally, the oldest parts of these systems become cemented sand dunes.

There are several measures we may implement to collaborate with the preservation of sand dunes:

Para la Naturaleza launched the Habitat ecological restoration program in April of 2018 after the impact of hurricanes Irma and Maria in Puerto Rico. Habitat promotes planting 750,000 native and endemic trees in 7 years. It also integrates community and educational initiatives to secure the forests of the future.

If you are interested in being a part of these planting initiatives, as well as participating in the ecological recovery program, you may register as volunteer by visiting www.paralanaturaleza.org, calling 787.722.5882, or visiting the Para la Naturaleza social media pages.

(The reference data about sand dunes and sand movements were provided by the DRNA.)