‘One in a million’ yellow cardinal spotted in Alabama

Auburn University researchers say this cardinal is yellow due to a rare genetic mutation. It's been photographed around Alabaster, Alabama in February 2018. 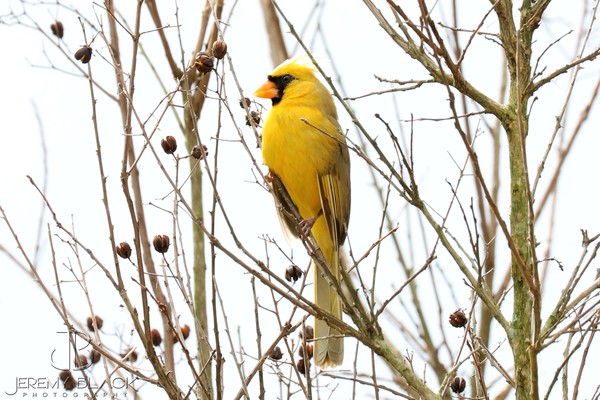 An extremely rare cardinal has birders and biologists flocking to Shelby County, Alabama this week, as images of a yellow cardinal have circulated around social media.

Auburn University biology professor Geoffrey Hill said the cardinal in the photos is an adult male in the same species as the common red cardinal, but carries a genetic mutation that causes what would normally be brilliant red feathers to be bright yellow instead.

Alabaster resident Charlie Stephenson first noticed the unusual bird at her backyard feeder in late January and posted about it on Facebook. She said she’s been birding for decades but it took her some time to figure out what she was seeing.

“I thought ‘well there’s a bird I’ve never seen before’,” Stephenson said. “Then I realized it was a cardinal, and it was a yellow cardinal.”

Stephenson said she would not give out her address or specific location due to fears that people would flock in to get a look at the bird, but said she lives near the new Thompson High School in Alabaster. She shot some video of the bird, embedded below.

The yellow cardinal is still around, she said.

“Every time I watch the bird feeder, I can see him,” she said. “The cardinals in my back yard typically come in the morning and again in the evening and I can only bird-watch on weekends until the time changes, but on weekends, I’ll sit there and watch for him.