Join Justin Proctor on his adventure to Puerto Rico where he was invited to help launch an exciting new book on one of the Caribbean’s most unique birds. 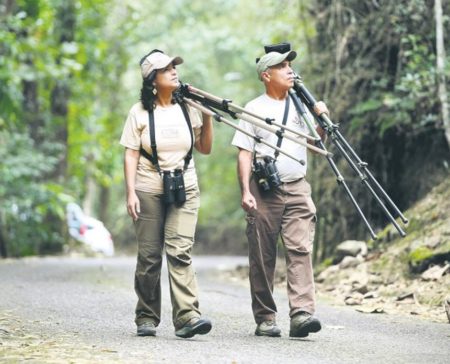 Everybody in Puerto Rico knows José (Pepe) González Díaz and Felisa (Fela) Collazo Torres in the same way: as a husband-wife team just as inseparable from each other as they are from their island’s natural landscapes. They wake up every day just as in love as when they met decades ago, and just as ready as they were the day before (and the day before that) to go out amidst their mountains, valleys, and rivers to discover something new…together. I’ve never met another couple like them. They are, like Puerto Rico, something beautifully special.

It is no hyperbole when I make the claim that Pepe and Fela have collectively spent tens of thousands of hours researching, photographing, filming, and producing educational materials about their island’s flora and fauna. It isn’t difficult to find their Aves Puerto Rico FelPe (Fela + Pepe) insignia on dozens of full length documentaries covering everything from endemic butterflies to birds. Their extensive YouTube channel is a good place to start your way down the rabbit hole. Keep in mind as you look through their material how much “behind the scenes” time and effort it takes to capture some of the high-quality, rare footage of many of the species that are featured. A 20-second shot of never before seen behaviors was likely the product of days, if not weeks, of time spent waiting and watching from within a cramped little blind

But beyond these invaluable pieces of work, Pepe and Fela are probably even better known for something else.

For more than 15 years, they have consumed themselves with unravelling the story of the Todidae family. And the more they dug, the more they found. The Todidae family is unique for so many reasons, but perhaps the most obvious is that it is a small family of only five species, all of which are collectively endemic to the Greater Antilles. You’ll find one species in Cuba, one in Jamaica, two in Hispaniola, and one in Puerto Rico.

That’s it. They belong to the Caribbean and nowhere else.

Todies are also unlike any other birds that you’ll ever see, guaranteed, which makes them a major attraction for birders and photographers from all over the world. But don’t just take my word on it. Pick up a copy of Pepe and Fela’s coauthored book, La Raíz de las Antillas: La Historia de la Familia Todidae, which has certainly proven itself to be the most comprehensive historical account of these birds ever published. The book is now available on Amazon, and should find its way into the hands of any birder that has ever had the pleasure of spending (or longed to spend) a few moments with a tody.