Research sites in El Yunque National Forest were offlimits for days after Maria hit on 20 September 2017. 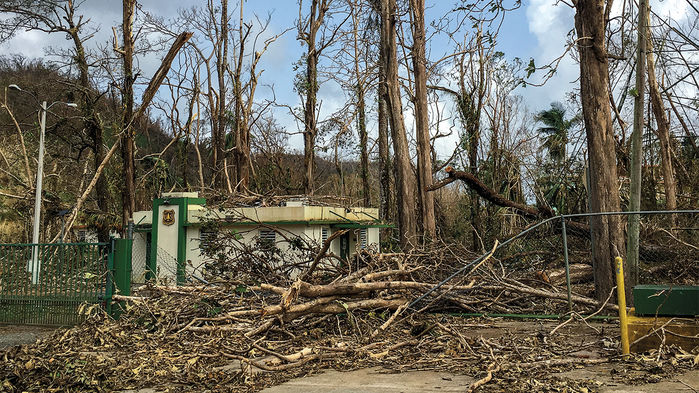 PUERTO RICO’S EL YUNQUE NATIONAL FOREST—A year after Hurricane Maria raked Puerto Rico with winds of 250 kilometers per hour and a meter of rain, the island is still struggling to recover. Estimated deaths have risen to shocking levels—nearly 3000—and although power has been almost completely restored, blackouts occur regularly. The wind and flooding also devastated ecosystems as diverse as mangrove swamps and rainforest. As they mend, scientists are watching closely.

A major focus is this rainforest in the Luquillo Mountains of northeastern Puerto Rico that scientists have been monitoring since the 1940s. The only tropical forest in the U.S. Forest Service’s (USFS’s) National Forest System, it has endured several major hurricanes. But Maria and Irma—a hurricane that struck the island a glancing blow just 2 weeks earlier—were the strongest in a century, turning lush forest into ranks of skeletal trees and piles of sticks. Maria also destroyed research infrastructure and blocked access to some experiments for weeks.

As scientists get back to work, the devastated forest presents a rare opportunity to explore how tropical forests—and their ability to store carbon—recover from the extreme weather that is becoming more common as the world warms. The wealth of ongoing research in the forest “has positioned us really well to tackle this question of how tropical forests are going to respond,” says Grizelle Gonzalez, an ecologist at the International Institute of Tropical Forestry, run by USFS in San Juan. Tana Wood, a biogeochemist and ecologist at the institute, says she was trapped in her house for 2 days after Maria, and her research site was hit hard. “But scientifically, it’s incredibly exciting,” she says. “It’s a unique chance to look ahead.”

Already the researchers have seen hints that as temperatures warm, forests may be slower to recover from damage. Other findings, from a long-term effort here to simulate hurricane damage, suggest more frequent major disturbances could also make forest ecosystems less resilient, in part by causing the downed trees and branches to release their carbon into the air rather than the soil. That could fuel further climate change and extreme weather.

Stepping into El Yunque used to offer relief from the ferocious sun. But now, Wood shades her eyes from the glare as she surveys new understory vegetation. Hurricane Maria destroyed the canopy that once blanketed the forest in cool darkness and shielded the experiment that Wood began in 2016, a year before the storms. Her project, the Tropical Responses to Altered Climate Experiment (TRACE), tracks how increasing temperatures affect wet tropical forests. Because the world doesn’t warm much during the time scale of a research project, TRACE features an infrared heating system that warms understory plants and soils by 4°C, fast-forwarding climate change.