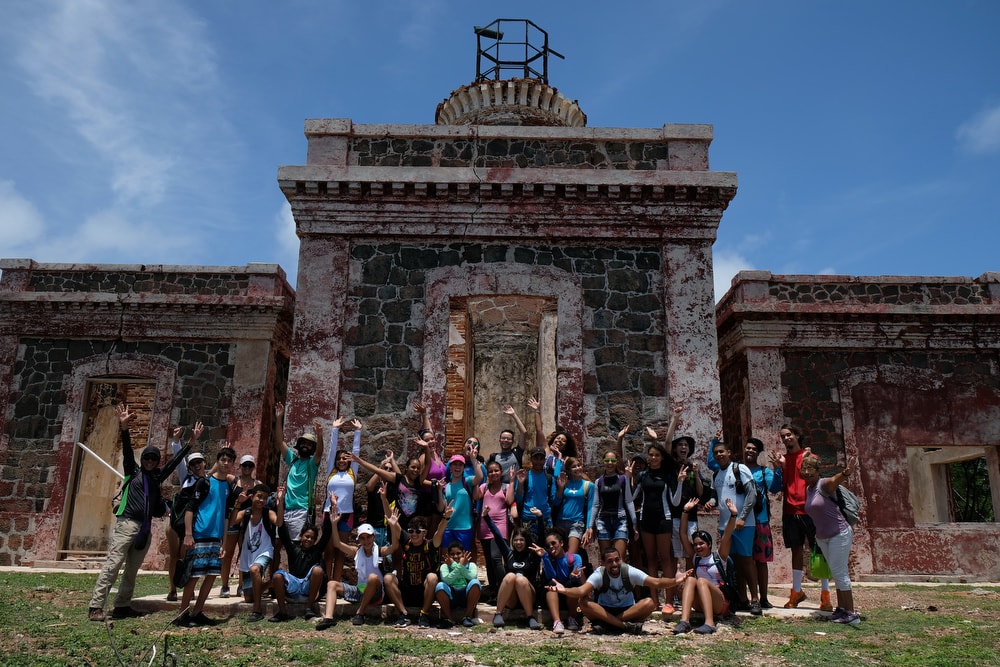 Traveling by boat is an adventure. Some people are ready for this undertaking, while others prefer to stay on shore, perhaps watching the tide. Living in this Caribbean archipelago is an advantage: we’re first in line to go and discover what by happy chance belongs to us.

Puerto Rico owns a series of surrounding islands, keys, and islets that— although small in size— feature habitats and natural areas that are highly valuable for its wildlife. The best known and most visited are the island-municipalities of Vieques and Culebra, but the list includes more than 16 geographical locations in the Atlantic Ocean and the Caribbean Sea.

A group of teenagers (ages 13 to 17 years old) from the Immersion Workshop by Para la Naturaleza embarked on a journey from the Medio Mundo and Daguao Visitor Center (located in the former Roosevelt Roads naval base in Ceiba) to visit the island of Culebrita for the first time. It took two and a half hours, battling winds and swells to reach the small island, which is located 32 km (approximately 20 miles) from the main island.

For Alondra Jiménez Ramos, who hails from Manatí, visiting Culebrita was a unique experience. “The visit was really awesome. This year, I was looking for summer camps that would let me experiment, go on adventures, and explore everything my island has to offer. I had already gone on the immersion workshops in Ponce and Fajardo. I hadn’t gone to Culebrita. Culebrita definitely exceeded all my expectations,” she said, grateful for the opportunity.

Another workshop attendee, Sara Eliza Abreu from Naguabo, also said it “was a great experience.” For Sara, who has participated in Para la Naturaleza’s Immersion Workshop four times and visited multiple protected natural areas, it was “very interesting to see the flora and fauna, and how they resemble or differ from the species in the main island.”

For his part, workshop attendee Antonio Manzano Ortiz expressed amazement, saying he “loved the landscapes and the extraordinary ocean view from the lighthouse. I had no idea Culebrita was so close to Saint Thomas.”

Indeed, Culebrita is the easternmost point, marking the geographical boundary between Puerto Rico and the British Virgin Islands.The island also features dry forests and beaches inhabited by organisms that are exclusive to the Caribbean and Puerto Rico.

According to Carlos Andrés Rodríguez— a herpetologist (a scientist who studies reptiles) and EcoDeTour representative with Para la Naturaleza— the presence of plants and animals that are native and endemic to Puerto Rico in Culebrita proves that the Puerto Rican islands —including Mona, Desecheo, Caja de Muertos, Vieques, Culebra, Culebrita, and other islets— comprise a single land mass that used to be connected and is now split apart by the sea.

For example, Culebrita is home to a few species that are endemic to the Puerto Rican islands, such as the mangrove cuckoo (Coccyzus minor) and the red-eyed coqui (Eleutherodactylus antillensis), which is a type of amphibian. Other native Caribbean organisms that can be found in Culebrita are the melon cactus (Melocactus intortus) and the wild banyan tree (Ficus citrifolia).

Upon arriving in Culebrita’s coasts surrounded by the Caribbean Sea, the workshop attendees were received by a clear blue sky, an intense heat, the density of the dry forest, sandy and rocky beaches, and crystal waters. If you looked underwater, “there were many fishes and other species I had never seen before,” Antonio confessed. The 14-year-old said that the experience of going snorkeling was better than anything else he had tried before.

The sea life in Culebrita is abundant, since the island is encircled by 1,200 acres of coral reef, featuring a wide variety of coral species, including endangered endemic species such as Acropora palmata, Acropora cervicornis, and Acropora prolifera. Furthermore, its beaches are a nesting site for hawksbill sea turtles (Eretmochelys imbricata), leatherback turtles (Dermochelys coriacea), and the green sea turtle (Chelonia mydas).

As they ventured deeper into the island, the group was able to spot a variety of native birds, such as the common moorhen (Gallinula chloropus), the mangrove rail (Rallus longirostris), the American oystercatcher (Haematopus palliatus), the ruddy turnstone (Arenaria interpres), and the osprey (Pandion haliaetus).

The youngsters also observed that, in spite of the enormous impact caused by Hurricanes Irma and Maria in the eastern part of the island, the remains of the historic Culebrita Lighthouseare still standing. “It’s a shame that it’s in such a state a decay. I’d like to see it restored,” remarked Sara, who was taken by the historical value of the place.

The Spanish Crown undertook construction of the Culebrita Lighthouse from 1882 to 1886, as proof of their control over the territory and to reinforce the protection against British and Danish invading troops.Andalusian engineer Manuel Maese Peña was responsible for its design and construction.
The lighthouse’s shape and design were determined by two main factors: efficiency and functionality. It has a distinctive “E” shape in order to accommodate two living quarters for the lighthouse keepers and their families, two office spaces, two bathrooms, a fuel tank, and a large water tank.

The construction process was difficult due to its remote location and the lack of adequate transportation, water, and qualified workforce. However, it only took five years to complete, what historians consider a record for hard work and intensive labor.

Currently, the structure is in a state of decay. Its roofs and windows have been destroyed by a long history of hurricanes. The walls, although seemingly intact, are at risk of crumbling due to the erosion of the bricks, rocks, and local wood used for its construction. Nonetheless, the estate has been part of the National Register of Historic Places since 1981.

In January of 2015, the municipality of Culebra and Para la Naturaleza signed an agreementto restore the lighthouse. This agreement seeks to develop a restoration plan for the structure based on historical conservation standards, and to manage the land where it is located to protect the building and its surrounding natural habitats.

“Rescuing a historical place is more than just saving an important building from the ravages of time. It also means honoring the people who dedicated their lives to shape the place and understanding how their shared histories have contributed to our cultural identity,” said Fernando Lloveras San Miguel, president of Para la Naturaleza.
Restoring the lighthouse would help Culebrita become an important ecotourism destination in Puerto Rico and the world. Besides, its biodiversity could inspire citizen science projects designed to monitor turtles and corals, analyze coastal profiles, conduct bird censuses, carry out archaeological excavations, reintroduce endemic and native species, and manage invasive species.

Puerto Rico’s inhabitants and tourists will also enjoy access to the place for sustainable recreation, featuring camping sites, hiking trails, and other spaces for use by the community, such as multi-purpose rooms, exhibitions, and sanitary facilities.

Support the restoration of #FaroCulebrita on National Lighthouse Day. Visit http://www.paralanaturaleza.org/culebrita/. It is time to make it shine! #ParaLaNaturaleza #PuertoRico