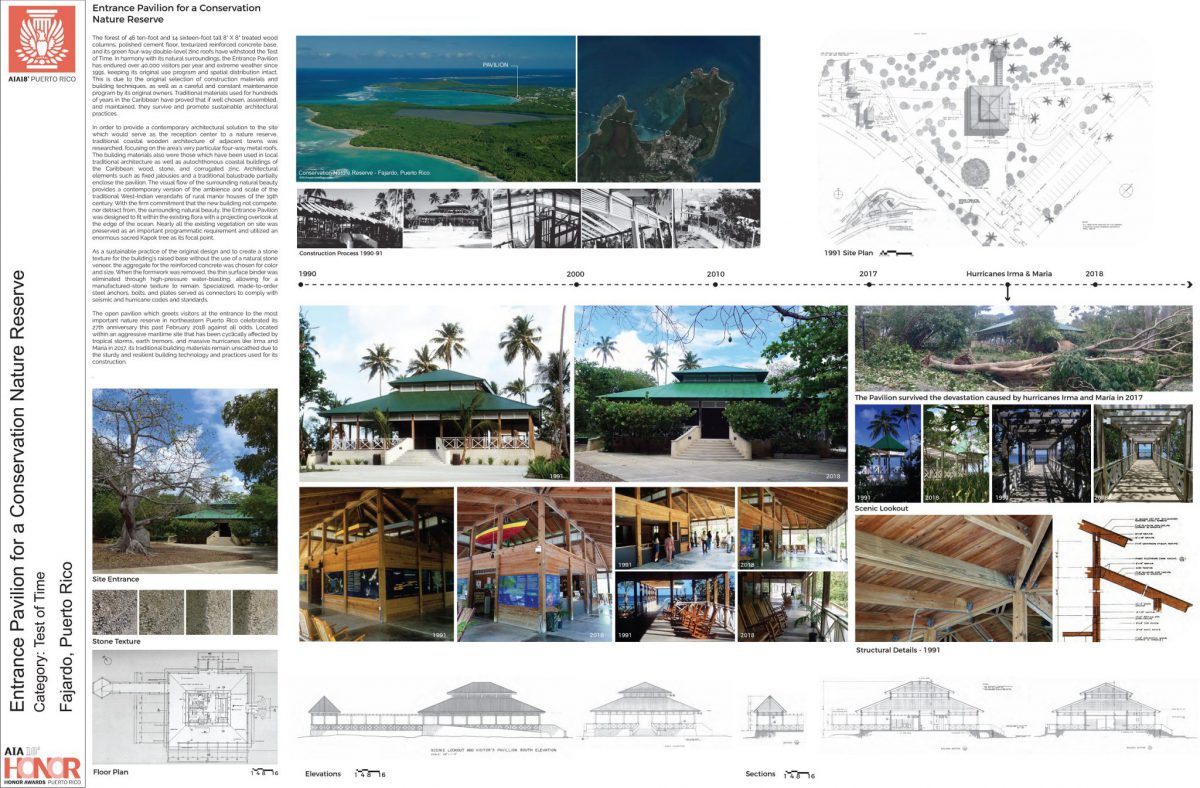 The entrance pavilion of the Cabezas de San Juan Natural Reserve in Fajardo, the drawings laying out the proposed design to restore the Culebrita Lighthouse, and Mapa de Historia –a study on the condition of historic structures after Hurricane Maria– all earned awards from the American Institute of Architects, Puerto Rico Chapter (AIAPR).

The entrance pavilion of the Cabezas de San Juan Natural Reserve received the Test of Time award, a recognition that the AIAPR rarely bestows. This honor is granted in appreciation of the architectural masterpiece, which has resisted harsh climates for over 25 years without suffering significant alterations to its structure.

The design proposed in 1989 by Architect Beatriz del Cueto, and whose construction was concluded in 1991, resisted the scourges of Hurricanes Georges, Irma, and Maria. It has never lost its relevance as a portal and pathway towards integrating visitors with the native environment of this natural reserve in Fajardo.

“We are very proud to receive this honor, which wouldn’t have been possible without the constant maintenance and care that has been given to this important and magnificent structure. Even after 27 years, all who have had the privilege of visiting have been impressed by its grandeur and the perfect state of preservation, thanks to the determination of Para la Naturaleza’s team,” said Architect Del Cueto upon receiving the award on October 20.

The acknowledgement bestowed by the AIAPR jury highlighted the excellence shown in their choice and use of materials and technology in the construction of the structure, which was designed and built specifically to resist the effects of climate events.

“The construction materials that have been traditionally used for hundreds of years in the Caribbean have shown that, if they are carefully chosen and used to build and given adequate maintenance, they will endure. And they also promote sustainable architectural practices,” states the jury’s accolade.

Meanwhile, the design drawings for the proposed restoration of the Culebrita Lighthouse, led by Architect José Javier del Toro, were acknowledged with an honorary award in the category of Unbuilt Design.

The jury’s decision highlights that, “The sensitivity of landscaping is essential for our future living in this planet, and this project captures that. Even better, this may be a place of shelter, feeding, and contemplation. This project lets the imagination run wild!”

Del Toro, for his part, added that “the proposal is the result of a very close collaboration with Landscape Architect Rosanna Vaccarino, the staff of Del Toro Arquitectos, and Planner and Professor Aníbal Sepúlveda, whose work documenting the history of the lighthouse and his long conversations with us have been of great value throughout this whole process.”

The program Mapa de Historia (Map of History), led by Para la Naturaleza and the University of Puerto Rico School of Architecture, received an honorary recognition in the category of Research and Publications. Mapa de Historia gathered an inventory on the condition of historic structures in Puerto Rico after Hurricane Maria, with the support of the Institute of Puerto Rican Culture and the State Historic Preservation Office.

The inventory was conducted within approximately one month, with the help of volunteers, architecture professionals, and students from the University of Puerto Rico-Río Piedras Campus, led by Architect and Professor Diana Luna, and Historic and Cultural Coordinator of Para la Naturaleza, Ivonne Sanabria.

Puerto Rico has 12 historic zones and 249 historic sites, which added a great level of complexity to the task. For three weeks, the volunteers visited historic sites and zones and documented a total of 4,882 structures in 32 municipalities.

“It was obvious for us in the jury that this project had to receive an award. They were able to obtain a comprehensive understanding of the condition of historic structures throughout the island, which they assessed systematically. Because of the pictures we saw, we could tell that they spent from dusk until dawn researching thousands upon thousands of structures, documenting all levels of damage. It was very important for the jury to support this project and the historic Puerto Rican heritage,” said Architect Thomas Marvel when reading the jury’s determination.

Fernando Lloveras San Miguel, Esq., meanwhile, emphasized that these accolades “demonstrate Para la Naturaleza’s commitment with sustainable design and architectural practices that are inspired in resilience and consistent with our climate, history, and culture.”